When it comes to Japan’s Christmas, we usually think decorating Christmas trees and having chickens or cakes with family or friends are the mainstream.

In this season when a number of events such as girls’ night out, parties with friends, and events of company are overlapped,
why don’t we make a great time in a different way by participating in tea ceremony on Christmas.

We came up with tea ceremony that is available even if you do not have Tatami room and it also goes with a party. 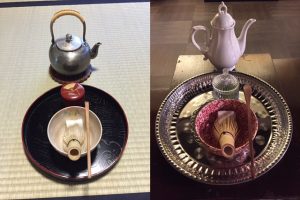 Of course, the traditional tea ceremony is in tatami room, and tea utensils are made by professional craftsmen,
but we sometimes use things which are not tea utensils by nature. We call it “Mitate”.

Sen no Rikyu, a founder of tea ceremony also picked up things which had not been tea utensils originally in those days.
For example, he and tea masters in the beginning of 16th century started to use Korean bowls used for Korean daily life for Japanese tea ceremony.
Rikyu thought their simplicity was suitable for the tea ceremony he had been creating.

In addition, Japanese potteries such as Shigaraki or Bizen were also the darning idea in those days
even though they are the main image we have for tea ceremony now.
Because symmetry tea bowls called “Tenmoku” imported from China had been the main stream of tea ceremony before Sen no Rikyu perfected the way of tea.

It doesn’t mean just finding similar shaped things instead of authentic tea utensils.
If you think they are the best beautiful design for the theme of the tea ceremony,
I think guests will feel the spirit of hospitality.

So, I select western dishes for Christmas party.
The original way of tea is “Ryakubon”, the simplest way of tea we can do on the table also. 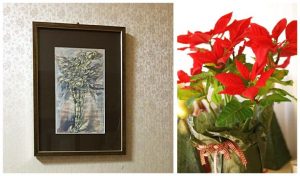 The important utensil which decides the theme of the tea ceremony is the hanging scroll of Zen Buddhism calligraphy in tatami room.
In this Christmas tea ceremony, I chose the painting of an angel playing violin created by an artist in Firenze Italy.
Firenze and Kyoto have been sister cities since 1965.
It was 50 year’s anniversary in 2015.
We can hear the hymns and Christmas songs from this painting.

I decorated poinsettia as we put a vase besides calligraphy in a tea room. 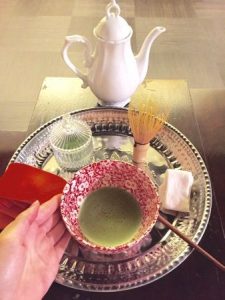 Circle wooden tray became a silver wine tray with grapes paintings.
Tea bowl is a red sugar bowl from England.
It’s like a red flower fell down on the ice.

Tea scoop originally made of bamboo became a wooden stir stick, and I selected a grass jewelry box for a tea container. 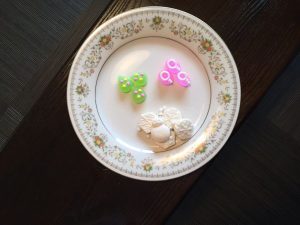 Sweets are “snows” made by Kameyayoshinaga and “Jingle Bells” ( trees & socks) made by Tawaraya Yoshitomi.
Both are sweet shops of long standing in Kyoto.
And I chose a western plate made by Noritake for them.

Talking lively, I suggested red and green Japanese candies “Konpeitou” for the second bowl of tea.
They are strawberry & melon made by Ryokujuan Shimizu in Kyoto.

The shape of Konpeitou looks like stars, which suits to Christmas night I think since a star on the top of the Christmas tree is an important star which had supported Bablical Magi to come to Bethlehem, where Jesus was born.

We can feel nice sweet fragrance opening the package of Konpeitou made by Ryokujuan Shimizu.
So, I thought it’s better to depart two flavors than mixed in one plate.
As a result, I used shot glasses for them.

How about Konpeitou with Bonbonniere for the souvenir in Kyoto? 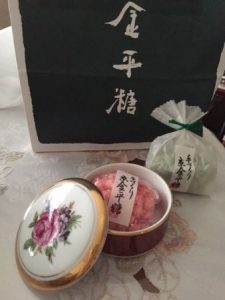 Japanese candy “Konpeitou” is pretty and last long. How about bringing back home as Kyoto souvenir?

It’s used as the gift from Japanese Loyal family as well as the popular sweets among children.
It takes over 2 weeks to make Konpeito.
The process of making is similar to the image of a couple constructing the warm home, or the heart of parents raising children.
So, it is thought that Konpeito is the happy sweets. 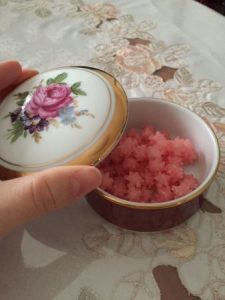 In loyal family, this Konpeito is given with a small box called Bonbonniere.

It’s the candy box in French word.
It’s made of silver often, sometimes pottery or lacquer shaped crane, traditional Japanese pattern which are thought as the happy designs. Each Bonbonniere is made for anniversaries in loyal family.

It was full house when I went to Ryokujuan Shimizu in Kyoto on Sunday.

Small packages are sold out for almost all flavors, so I could buy one with Bonbonniere.

This elegant box with roses can be used as a container, an interior decoration, or the dish for a special guest.

I wish you a merry Christmas with your family, friends, or co-workers.

If you don’t have such opportunities, please don’t worry.

I’m waiting for all of you. 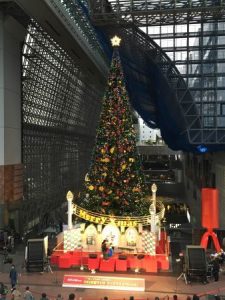