Japanese sweets for the early spring

Tsubaki mochi is the traditional Japanese sweets, the rice cake with a sweet bean ball inside is put between 2 camellia leaves. (Tsubaki means camellia.)

The ingredient is similar to Sakura mochi in the west of Japan,
but Tsubaki mochi is more difficult to find in a sweet shops.

Tsubaki rice cake is written in Genji tale written over 1000 years ago. 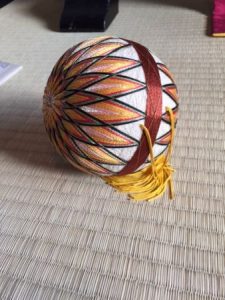 Genji tale is the oldest long novel in the world written by a woman writer, Murasakishikibu about 1008 in Japan.
It’s long love story in the Japanese palace in those days. In other name,
we call it “purple tale”, which is thought as the high noble color in Japan.

In Genji tale, young men were eating Tsubaki rice cake and pears after playing kemari; the ancient football game of the imperial court.

Tsubaki rice cake in those days was made of just rice cake and amakuzu, which is the natural sweetener,
so it was different from the one we have now.
I can imagine it’s really simple white dumplings in those days and camellia leaves were useful to pass around sticky rice cakes.

It is said that they were eaten as the light meal more than just snacks. 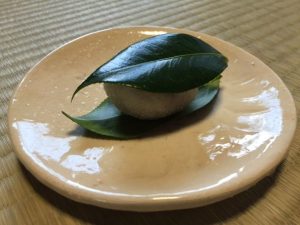 This is the Tsubaki rice cake made by a traditional sweet shop in Kyoto, Oimatsu.

It’s moist and soft rice cake with a sweet bean ball in it.
The color contrast of white and green leaves is also beautiful.

Since not all Japanese sweet shops sell this sweet even in February, it might be a little difficult to find. 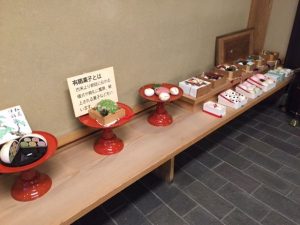 Oimatsu means the old pine tree. It’s the traditional sweet shop near Kitanotenmangu shrine in Kyoto.
They are making varieties of sweets not only for tea ceremony but also for Japanese wedding and the sweets reflecting seasons in this area.

The Japanese wedding sweets were decorated in the shop. 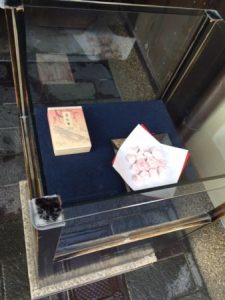 In February, many kinds of sweets representing the plum flowers in Kitanotenmangu shrine are made.
The small pink dumplings on the photo are one of them.

In addition, they have the cooking class of Japanese sweets for tourists.
I have seen some Japanese and foreign tourists joining the class early in the morning.
It looks very interesting. 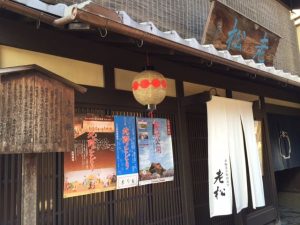