The origin of Nashinoki shrine 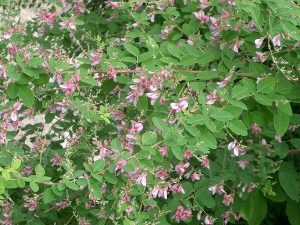 The god enshrined in Nashinoki is Sanjo Sanetomi （1837-1891）, who devoted himself to the cry of “reverence of emperor and the exclusion of foreigners ” in those days.
He once got kicked out from Kyoto even though he was born in the noble family.
But he returned back to restore the imperial rule in 1868.
He is also known as the god of learning and culture.

Nashinoki is famous with the festival for bush clovers in September.
We can see Japanese dancing and listen to the ancient court music called Gagaku in the festival.
It has the atmosphere of the noble imperial palace. 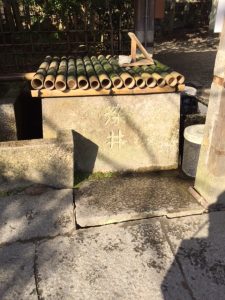 Somei is the special mild water in Nashinoki shrine. It’s also famous as the water for tea ceremony.

We often use Somei water for the way of tea in summer, which is called “tea ceremony for the special water”.
Before drinking powdered green tea (thick tea), we drink exquisite water in a bowl sharing with other guests. 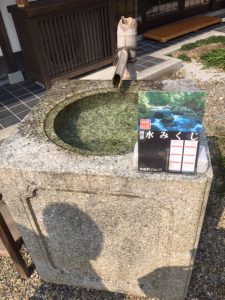 I don’t know if it has the connection with the special water, but there was “Omikuji” using water in the shrine.
Omikuji is the paper fortune we are often able to try in Japanese temples or shrines.
Immersing the paper, the fortune telling will raise to the surface.

Tea Ceremony at the end of February 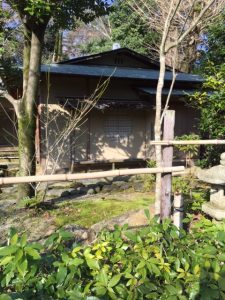 I went to the tea ceremony in Nashinoki in February 28th.
We could feel the spring festival of March in advance.
I felt other guests were also moved to see beautiful tea utensils and Japanese sweets which represent the spring of March.
(Saying “spring”, we have many kinds in Japan. For example, the early spring in February, middle in March, and full blooming cherry blossoms in April.)
The original idea of the host was fully used in the tea ceremony.

One of the surprising thing was sweets made by Senbon Tamajuken in Kyoto.
The shape was the pretty camellia with red and white petals.
I have heard that the artificial camellia flower is one of the symbol in the spring festival* of Todaiji temple in Nara.
They were served on the large plate made of wood and lacquer with real camellia’s green leaves.
It was the impressive art in today’s tea ceremony. 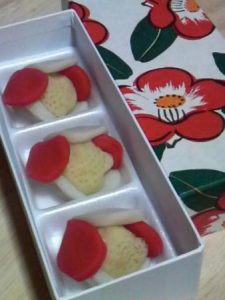 This photo is the camellia sweets “Norikoboshi” made by Manmando in Nara.
I guess it was the original model of today’s sweets.

We felt the effort of the host seeing the rare sweets made only for today’s tea ceremony.

It’s not necessary to wear kimono in Nashinoki shrine’s tea ceremony.
After learning the basic rule as the guests, I recommend you to go Nashinoki to enjoy the authentic Japanese tea utensils.