Since it is March, the tea utensils represented Girls’ (doll’s) festival. 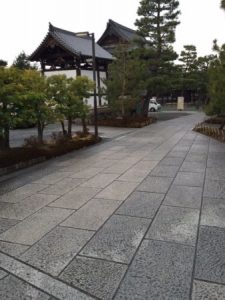 The name “To-yo-bp-“ came from the person’s name Cho-sei Toyo-bo- (1515-1598) who was one of the leading disciple of Senno Rikyu, the founder of Urasenke Tea Ceremony school.

First, To-yo-bo- tea house had been built as the sub-tea house for the big tea ceremony in Kitano Tenmangu shrine held by the strongest samurai in those days, Toyotomi Hideyoshi(1537-1598).

Since To-yo-bo- was the priest in Shinnyodo temple in Kyoto, the tea house had been relocated to Sinnyodo once, but rebuilt again in Kenninji temple, which is the building we have now. 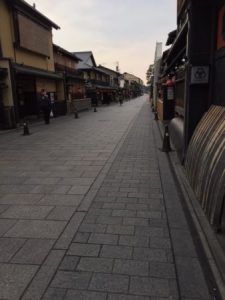 Actually, the tea ceremony is held in Seiryo-den sub temple, next to the real tea house To-yo-bo- to maintain the old building.

It’s near from the gate on the small path west of the Wins Kyoto on Hanamikoji Street in Gion area.

It is held in every 5th, which is the death anniversary of To-yo-bo-.  Only the members can join, so the tourists are not allowed to enter although it’s possible to see the real To-yo-bo- tea house from the garden in Kenninji temple.

Kenninji was built by a priest Eisai, who had brought tea leaves to Japan from China. It’s thought that the important tea ceremony for Urasenke tea school.

One day in the big tea ceremony 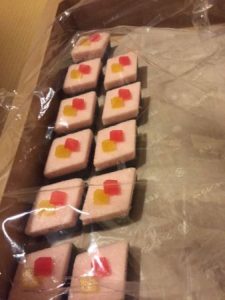 The main staff of the kitchen called “mizuya” starts bringing the tea utensils one day in advance. And the tea ceremony day starts really early in the morning because the first session is from around 8am.

The sweet in March 5th was the diamond rice cake made by Tsuruya Yoshinobu, which is the item of Hina doll’s festival. The two diamonds on the top represents hina doll and her husband.

The dried sweets shaped shells were made by Kameya Iori, who is the specialty store of Japanese cookies for tea ceremony. The red and white shells are also thought as the item of the girl’s festival. Our guests seemed to be delighted to see the pretty sweets! 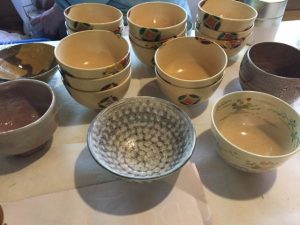 In To-yo-bo- tea house, guests will have soba after tea. It was fine spring day to sit on the veranda seeing Japanese garden.

It was great experience for me to welcome around 300 people in the big tea ceremony.

We often use “the hanging iron kettle” in March although the iron kettle is usually put on the trivet in other seasons.

The tea container was made by off-white lacquer with shells paintings. It looked beautiful on the tea shelf called “kasumi”, which edges are red.

Japanese tea ceremony is not only making and drinking tea. Feeling season by the tea utensils is the important point. I really enjoyed pretty tea utensils for Doll’s festival in March.

*only the members can join.