I was wondering if people in Kyoto are interested in learning tea ceremony in English, so I didn’t know if people join with this event till just one day before the event.

Fortunately, this event in Tea Ceremony Koto was published on Kyoto newspaper in March 19th, just one day in advance and some Kyoto children got together with this special event.

Why I had planned such a minor event? 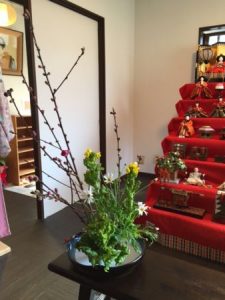 Actually, Tea Ceremony is not so very popular among young people in Japan. Many Japanese have no experience to attend the tea ceremony though it had been thought as the necessary education for young women before getting married 30 years ago.

I think it’s too old custom that every women have to learn before the marriage, but it’s sad that young people go far from the traditional culture.
On the other hand, Japanese children start learning English from elementary school and some start going to the private English school from the young age like 3 or 5 years old. It’s trend for children to learn English.
I thought if they learn tea ceremony as well as English, it’ll be helpful topic to communicate with foreigners not only for tourists but also for the business situation they will encounter in the future. 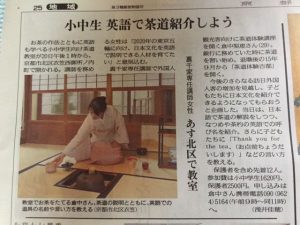 Since the quite big photo was put with the article, some of my friends and neighbors made phone calls and e-mails me to say they had noticed the article in the morning in March 19th.

I was so glad that a junior high school student also call me by himself seeing the article and joined this event.

Although I know tea ceremony is not very popular among young people in Japan, I was glad to know there are some young students who are really interested in tea ceremony and some children also thinks they would like to introduce it to foreign people. 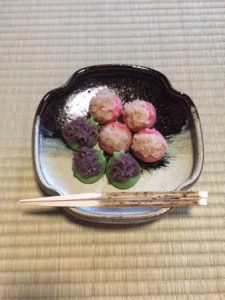 March 20th is the last day of Hina doll festival’s tea ceremony. I have started Cherry blossoms’ tea ceremony from the next day.

“Hichigiri” is the special fresh sweets only for Hina doll’s festival. In other words, “Pearl oyster” because of this shape. Today’s one were made by Sasaya Morie, near from Tea Ceremony Koto.

“Hichigiri” means pulling the rice cake. It is said that they had no time to round the rice cake in the imperial palace to welcome a lot of people in March 3rd, the celebration day for girls’ children. 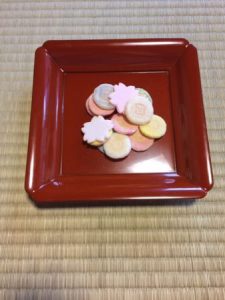 In addition, the colorful dried sweets were made by Suetomi, one of the traditional sweets shop in Kyoto.

The shape of Sakura is pretty.

We tried tea ceremony in English! 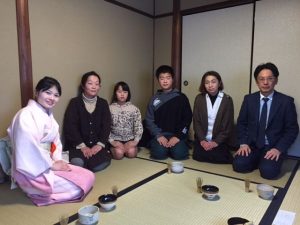 A junior high school student who joined the event said he would like to learn how to explain Japanese sweets in English for his family job.

Another family from Uji, the best place for powdered green tea in Kyoto came to learn because they have the chance to serve matcha to foreign tourists.

I hope English tea ceremony experience will help them in the future and I believe it leads to the peaceful cultural exchange between countries.