Japanese alcove is the important place in a tea room.

Nowadays most of Japanese live in western style houses more than Japanese house with tatami mats. Some young Japanese don’t understand what’s Japanese alcove “tokonoma”, where we decollate a hanging scroll of calligraphy or Japanese paintings with some flowers. I have also never thought about how to decollate the traditional alcove before learning tea ceremony. I had just recognized it as the place to display important things when I was a child.

Today, I’d like to inform you flowers and a vase on Japanese alcove.

Varieties of the vase for tea ceremony

We call the vase for tea ceremony, “Hanaire”. According to the teaching by Senno Rikyu, a founder of Urasenke tea family, we should put flowers like they are in the field naturally. It doesn’t need too much decoration.

The materials for the vase is bamboo basket, bamboo, potteries or metal.

Talking about only bamboo baskets which are used mainly for the way of tea in summer or the beginning of the autumn, we have many designs like the photo. 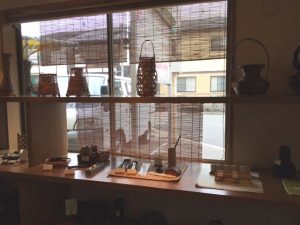 The other material such as bamboo (not baskets but made of one piece of bamboo), potteries etc.. we can use whole in the year, but they are parted in 3 groups “Shin”, “Gyo” and “So”.

Shin means most formal. The vase made of metal or celadon pottery are parted in this.

Gyo means the middle. The grazed potteries such as Seto ot Tanba.

So is the most casual ones. Bamboo or potteries without any paintings or coasting.

The plate under the vase is necessary in the most formal alcove. 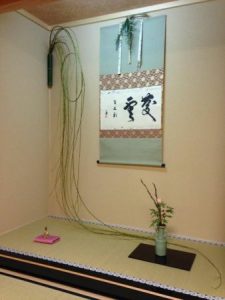 The most formal Japanese alcove has the main post, the wooden plate to cover tatami which is higher than the floor we walk or sit, and the wooden bar put upside of the alcove.

We need to put the plate under the vase made of one piece of bamboo or potteries on this kind of formal alcove.

Precisely speaking, vase parted in the most casual “So”, the plate made of wood is appropriate while we put the plate coat with lacquer for the most formal vases “Shin”. 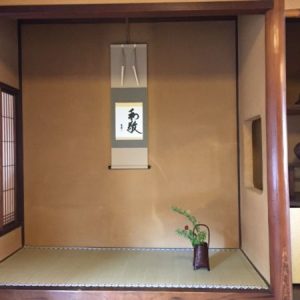 But there is an exception for this rule. For the basket made of bamboo or something, we don’t put any plate under the vase even though on the most formal alcove.

For the casual alcove same height as the floor, we don’t use any plates for vases.

Itadoko (or Humikomidoko) is the casual alcove which height is same as the floor we walk or site. Usually, it’s made of wood but I’ve heard some are made of tatami mat like the most formal ones.

On this kind of alcove, we don’t need to put any plates under the vases even though the vase is made of potteries.

Where exactly should we put the vase on the alcove? 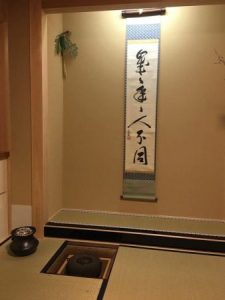 There is a vase on the right side on the photos accidentally, but it’s not always right side. We put the flowers near the kitchen usually.

Not only putting on the floor, but also there are some vases to hang from the ceiling. The rule of the place is same as the floor.

However, if the hanging scroll was the horizontal writing, the vase comes in the middle of the alcove.

It sounds really strict, but I agreed with it. It looks more beautiful if we follow the rule.

I think it will be helpful when you decollate flowers in your house.