The special tea ceremony seeing the fireflies is held in Shimogamo Shrine in Kyoto every year in the beginning of June.

It’s third times I join this event. The fireflies are thrown into the forest called Tadasunomori at night. It becomes whimsical and visionary place.

The small open air market in the shrine 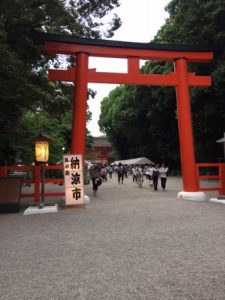 Japanese sake, sweets, pickles, etc , the delicious foods in Kyoto are sold along the way to the main building of the shrine on the day of the tea ceremony. It’s like early summer festival. 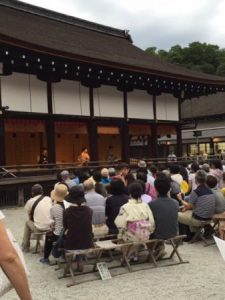 Before the fireflies appeared, a lot of people had visited here to enjoy the open air market and the show of wearing Ju-nihitoe (kimono for loyal family) on the stage. Japanese harps were played by ladies wearing kimono, which made me imagine the scene of love story, “Genji tale” written in Heian period (794-1192).

Tea Ceremony under the light of Fireflies

The special tea ceremony under the light of Fireflies has been held every year since 1991. We can choose from 2 rooms, one is table and chair style, the other is on tatami mats.

The tea room was almost outside without windows, and the sweets were served with paper plate and small knife for everybody including tourists or beginners to join. The golden powder on the sweets is a firefly.

The calligraphy which represents “the river stream” to feel cooler in summer, a dark red tea container with the pretty fireflies’ painting, and the bamboo tea scoop named “green willow” where fireflies often live were chosen for today’s tea ceremony. 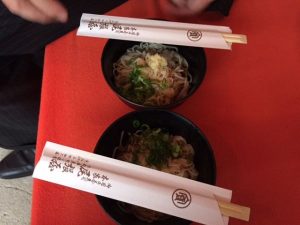 After the tea ceremony, cold soba (noodle) made by Owariya was also served.

The long lines to see fireflies in the shrine 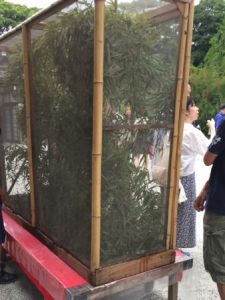 About 600 fireflies gathered in the shrine are in the big basket. After the sun set, all of them are thrown into the forests.

The walking path is prepared for this event, so there were long lines in front of the gate when the tea ceremony had finished around 7pm. 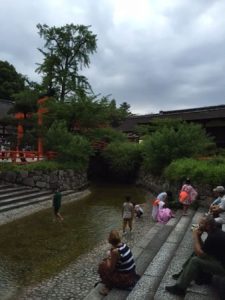 Maybe it’s hard to see them in the quiet atmosphere, but we can find kind lights of fireflies in the walking path. Of course, you can come just to see fireflies not including tea ceremony. A lot of people wearing yukata or summer kimono were there. 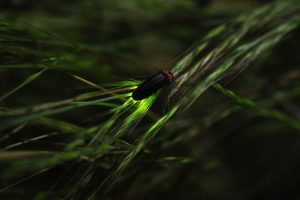 If you come earlier, maybe it’s good idea to walk around the open air market. 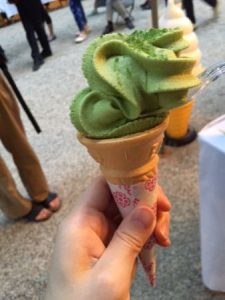 Look at this matcha ice cream. The same tea powder made by Sho-fu-en as the tea ceremony is used for this special desert. We could enjoy matcha flavor more than other since the pure powdered green tea is sprinkled on the top.

Kyoto has many local events even in the rainy season.

The tea ceremony in Shimogamo shrine was finished this year, but we still can see fireflies along the path of philosophy or Narutaki in Kyoto.