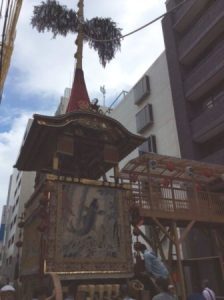 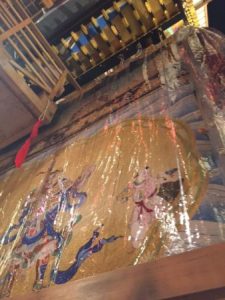 If I come with somebody, usually they don’t agree to join tea ceremony because there are too many other things to buy or visit along the street. Many of my friends don’t learn tea ceremony actually.

It is the reason why it is the first time for me to join this year. 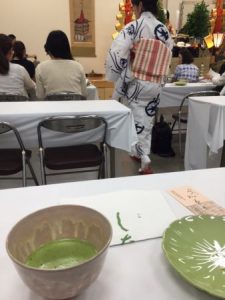 The tea ceremony for Kikusui boko (float) is the annual event for Gion festival in Kyoto. Some people are looking forward the tea ceremony every year.

Although I had joined Gion festival for 30 years since I was born, it was surprisingly the first time for me to join this tea ceremony.

Kikusui means a drop from the chrysanthemum, which is the symbol for the longevity.

There is the space for the tea service on the second floor beside Kikusui floats.

Hio-gi, reopard flower welcomes us in front of the gate.

It’s very casual tea service more than tea ceremony since table and chairs are used and we can’t see the way of tea.

Don’t need to worry about the traditional rule of drinking. And you can go with your small children, too since it’s very casual style. 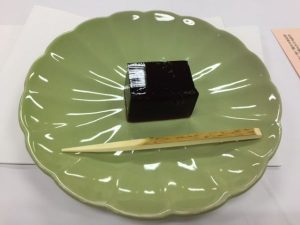 The special thing of tea ceremony here is the gift everyone can receive.

We can bring the plate shaped chrysanthemum used for the sweets back to our home. Some of my senior of the tea ceremony enjoy collecting the plates every year since the colors are different each year.

In addition, we can have summer special sweets here. It’s called “shitatari” made of agar, black sugar and wasanbon sugar.

Walk into the back street of Kyoto 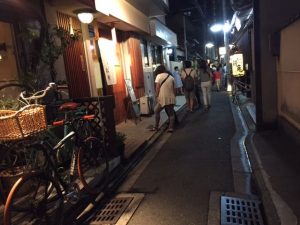 Since I had lived near here few years ago, I remember the shops and small restaurants on the small back street, too.

It was so crowded on the main streets, but you can relax a little where we have Italian, Japanese, and Nabe (boiling food) restaurants and so on.

Since Gion festival is called “hamo (pike conger) festival” in other words, Japanese restaurants look more popular than others among tourists. 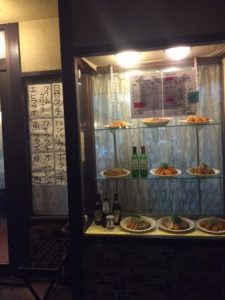 Otherwise, the small western restaurant was also attractive for me. It was the place I sometimes go for dinner when I was working for a back near here.

It was only the regret I couldn’t take any photos of my yukata, but I more or less enjoyed Gion festival alone this year!