September 15th is the full moon day in Japan 2016.Around the day, we have the event to watch moon in temples and shrines in Kyoto.

Daikakuji temple is the most famous one for this day.

Floating the traditional boats on the O-sawa pond in the temple, we enjoy watching the beautiful 2 moons, one is the real moon, another is the moon reflecting on the pond.

The full moon festival on the quiet Osawa pond

Daikakuji is in Sagano area, about 20 minutes’ walk from Saga station of Keifuku line. From Kinkakuji temple (Golden pavilion), we drive though the path called “Kinukake no michi” where Ninnaji temple and Hirosawa pond are. The scenery around Hirosawa pond is one of my favorite in Kyoto.

Unfortunately, I couldn’t see anything at night, but we can see the ears of the rice or Japanese silver grasses swaying in the wind around Hirosawa pond in the daytime. I guess the autumn is the most beautiful season for this area.

Let’s get back on truck.

Daikakuji temple is the old imperial palace in Sagano area, called “Sagagosho”. The full moon festival has been held since the era of Saga emperor（786～862）, who loved the literatures such as the short poem or Chinese poem.

We tend to mistake Osawa pond as Hirosawaw pond, but Hirosawa pond is much larger than Osawa in Daikakuji temple.


The tea service for watching the moon 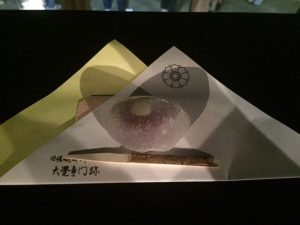 I had planned to get on the boat today, but the ticket has been already sold out. If you try it, you had better to go at 3pm to buy the ticket since they don’t accept the reservation via phone or e-mail (in 2016).

It was lucky I could have the seat for the casual tea ceremony. Even though there was the long line for the boats, we didn’t have to wait for the tea.

Since the tea room is on the 2nd floor outside, we could see the beautiful moon and the elegant boat on the pond.

The sweet was “the beautiful moon”. It makes us imagine the scenery of this pond and the moon very well.

It was also great experience that I could talk with a woman sitting on the same table. We enjoyed talking about our jobs, leaning English, and family even it was the first time to meet her of course.

I guess the scenery from the tea space is as beautiful as the one from the boat.

Walking around the Osawa pond.

It was impressive to find a red tower became more beautiful at night. It was the different scenery compared to the daytime.

Everybody enjoys talking and eating around the tower. Japanese traditional sweets were also sold around here. 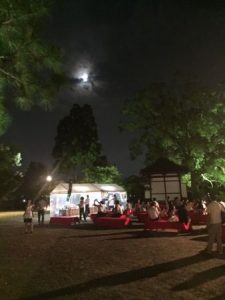 The full moon festival in Daikakuji temple is till today, September 17th.

I highly recommend you to go. 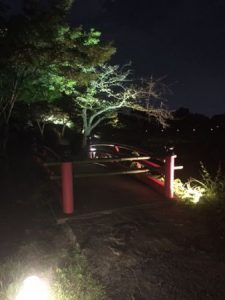