Japanese tea ceremony only for October??

October is the month for the special way of tea putting the iron kettle in the middle of tatami mat.

Feeling the cooler wind of the autumn, it’s time to change the utensils for the tea room.

The maple leaves started turning into red gradually in the north of Kyoto.

Special way of tea for October

You might think it is different tea school?! Many of the beginners have never seen this on TV or something.

Actually, it is the way of tea only for October called “Nakaoki”, which means putting the iron kettle in the middle of tatami mat.

We put the fresh water container on the left corner of the iron kettle, and put the lid rest in front of it.

To have endless sorrow at parting 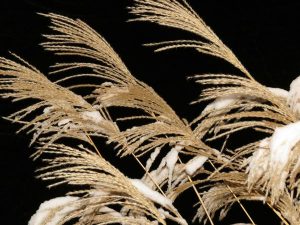 In this month, more primitive or imperfect utensils are often used compared to other months. For example, Furo; the stove for the iron kettle is sometimes broken or curved on purpose. The tea bowls are also patched.

October is the time to have endless sorrow at parting to the way of tea called “Furo” from May to September in addition to the powdered green tea which had been used since last November.

Next month, November is thought as the New Year among tea masters because it’s time to open the new tea jar.

Now we are waiting for the New Year enjoying the last tea and the way of tea at the turn of the seasons.

*Since Feeling seasons is very important for Japanese tea ceremony, I change tea utensils every month or 2 weeks, more than 4 seasons.