Have you ever heard of “Kappa” or “Kawataro” ?

It’s  the animal or  a monster living in the river in Japan.

You might heard of “Kappa sushi” restaurant chain, or seen the character of Kappa in Kizakura Sake company in Fushimi Kyoto.

Even though it’s just the imaginary monster, they are often used for the Character of many companies in Japan.

Surprisingly, we also have the tea utensil called “Kawataro”, which means “Kappa”. 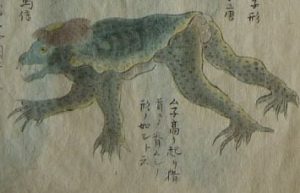 Kappa or Kawataro is the monster living in the liver.

“Kawa” means river. “Taro” is the traditional name for boys.

They have the strange flatter plate on their head. If the water on their plate spill out, they will lose their power.

Although they are just the monster in the fiction, we have many old stories or some evidence of watching the real Kappa.

Many Japanese company love to use Kappa for their characters such as Sushi restaurant Kappa, or Kizakura Sake in Fushimi Kyoto. 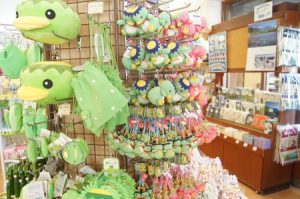 Such a pretty Kappa are also sold in the souvenir shop in Japan.

The flatter plate on the head is the symbol of Kappa.

Kawa-Taro in the traditional tea ceremony ! ~For the rainy season~ 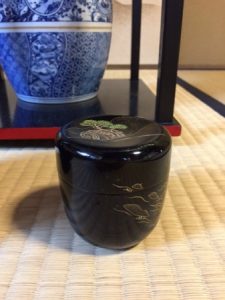 This is the tea container for Matcha tea made of wood and lacquer.

But its shape is a little different from ordinary tea container. Can you tell what’s the difference? 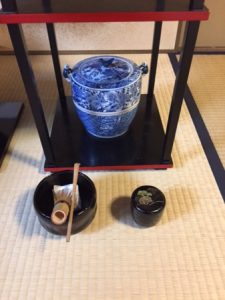 The lid is slightly dented like the flatter plate on Kappa’s head!!

You might think it’s a little broken or something, but it’s created as “Kawa-taro” on purpose.

Since they live in the river, we often use this tea utensil for the rainy season or summer (around June). 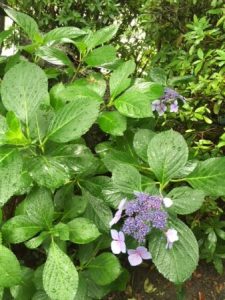 The theme of tea ceremony changes according to the season.

Not only 4 seasons, but I change tea utensils every month authentically here.

After Aoi festival (May 15th) in Kyoto, “water” tea ceremony will be popular because June is the rainy season.

It’s famous that Kibune shrine which worships the “water god” holds the tea ceremony for “water” in July 7th every year. (In lunar calendar, rainy season starts in July).

Even though June is not so popular season for sightseeing, we can enjoy whole season in the tea room!