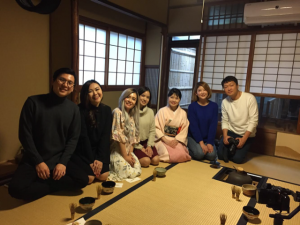 We are very happy to have the tea ceremony lesson for the guests who have some responsibility to introduce Japanese culture to  their countries.

From  Indonesia, Australia, Korea, and Denmark!

They were invited to promote Japanese traditional cultures, pop-cultures, natures, etc by the Ministry of foreign Affairs in Japan. 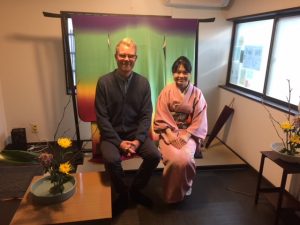 From the opposite side of the world! 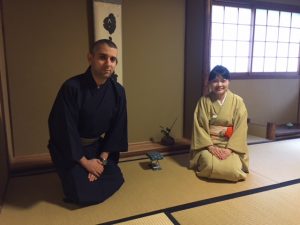 He came from Tunisia, and experienced Japanese tea ceremony first time in Kyoto.

He seemed to have difficulty for sitting on the tatami floor, but I hope he enjoyed private Japanese tea room,

where I displayed some seasonal items for March. 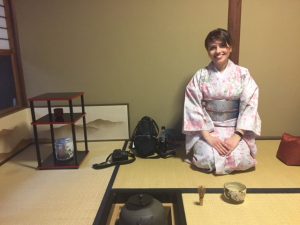 She is from Azerbaijan.

Light pink kimono looks very nice on her!
She understood Japanese introduction of tea ceremony because she is a teacher of Japanese.
I was happy to hear that she wants to introduce Japanese culture as well as language.
Definitely I agree it will be very helpful to understand the meanings of language if students know its culture.

She enjoyed wearing kimono so much because it was first time for her to wear it! 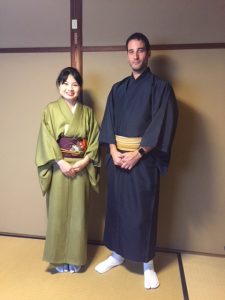 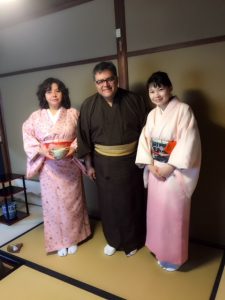 They are from Bolivia, famous for Salar de Uyuni in Japan.

Since Algentina and Bolivia are opposite side of Japan, they might came from most far countries from here.

Watching the way of tea carefully, she said she felt the spirit of Japanese traditional culture. 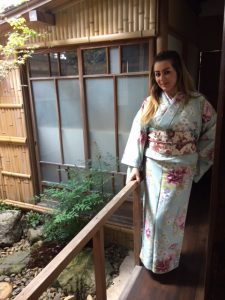 She is from Iraq, took this beautiful photo beside our small Japanese garden wearing light blue kimono.

Although we have welcomed the guests from over 50 countries,
she was a first guest from Iraq for me.

We Japanese often read war or terrorism about Iraq on the Newspaper,  but I’ve noticed we don’t know about the cultures or other things about Iraq as well as what people in Iraq think about Japan.

Unfortunately, we didn’t have enough time to talk about them,
I really wish she has enjoyed Japanese traditional culture and felt peace in a tea room.