I don’t know much about warrior and Samurai and have no experience of them.
However, when you listen to the story of Tea Ceremony, warrior and chivalry,
I think they have something in common historically.

Being interested in the spirit, I visited the Aikido class in Kyoto Nishijin near my house. 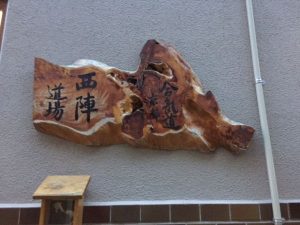 Aikido is a non-competitive Japanese martial art of self-defense developed by Morihei Ueshiba (1883-1969).
It’s the newer Bu-do created in the early 20c.

“The practice of Aikido should coordinate and develop the mind, body and spirit. “

Aikido Kyoto Nishijin is in the Japanese traditional house on the very narrow path a little difficult to find, but many bicycles were lined in front of the house.

It looked really powerful I could hear the sounds of a break-fall even from outside of the house.

Entering the Aikido house, I was surprised that almost half of the students were foreigners.
I’ve heard that some of them came to Japan to learn Aikido, some are the students of University.

I had heard of this Aikido class by French couple in the café near here,
but it was more international than I had imagined.

The rule for dojo (a training hall) 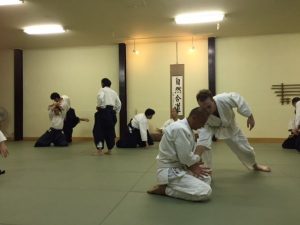 As same as there are some rules in Japanese tea room or traditional old house, dojo (a training hall) is the sacred space.

After taking off shoes, we sit in Seiza style and bow towards the alcove, where a hanging scroll,
a picture of the founder of Aikido, Ueshiba Morihe, and some flowers were displayed.

I felt they inherit the spirit of Ueshiba Morihe called “O-sensei”, which is the important things for all the masters and students. 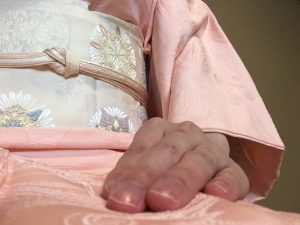 And we must not cross our arms in dojo, but put the palm on the thigh.

Actually, I don’t know nothing special anymore, but I sat in Seiza style with my hands on thigh like the formal way of tea ceremony.

The Aikido training in Nishijin dojo

The chief trainer of Aikido Kyoto is Yoko Okamoto. She looked cool like samurai.

First, the master shows the example of the movement, and students practice it many times in the pair. It seemed there were many kinds of locking techniques.

They must train their wrists hard. 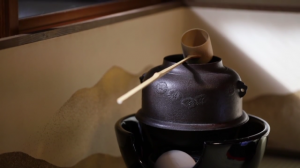 I have seen the performance of Aikido few years ago.
It seemed like valet dancing more than fighting.
Of course, it’s the techniques to redirect or neutralize an attack by many people, but it looked elegant and beautiful.

I understood Aikido spirit aims the non-competition or peace& harmony, which are same as tea ceremony.

In addition, the training to remember the model movement and the spirit to respect each other are also similar to tea ceremony even though these are totally different things to do.

It was really great experience for me to see the training of Aikido class.
I was amazed by the powerful and sacred atmosphere of dojo, which gave me fresh feelings.

For me tea room is the place of my job, but dojo was the new things.

I guess people who train Aikido or other Bu-do will gain fresh spirits entering the tea room.

It will be the new world for you to refresh your mind!