Daitokuji temple is 3 stations by city bus from Kitaoji subway station. It’s not very popular compared to Kinkakuji or Kiyomizu temple,
but I like the calm modest atmosphere of Zen Buddhism.

It has the deep relationship between Cha-do, as famous tea masters Murata Juko, Senno Rikyu, and Takeno Jo-ou had trained by Zen priests here.

So, Daitokuji has many tea rooms in each sub-temples inside.
Students and teachers of Urasenke School in Kansai area sometimes get together to have big tea ceremony here.
In addition, some sub-temple hold tea ceremony every month here. 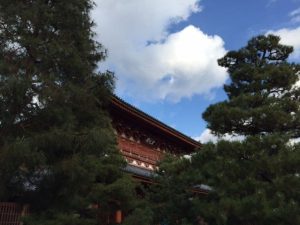 Daitokuji temple is the main temple of Rinzai Daitokuji section of Buddhism.
It had been destroyed once by the big war from 1467-1477, but Priest Ikkyu rebuilt.

The big red gate “Kinmo-kaku” is assigned as the important cultural properties in Japan.
Senno Rikyu, the founder of Urasenke tea ceremony built the second floor of this gate.
But it’s famous that he was ordered to kill by himself (Seppuku) by the strongest samurai in those days, Toyotomi Hideyoshi because of Rikyu’s statue placed on this gate.
Hideyoshi said it’s like treading on the head of noble people walking through the gate.

It’s not so very famous than Kinkakuji or Kiyomizu temple, and has less tourists. But I think it’s good place to relax and feel Zen. 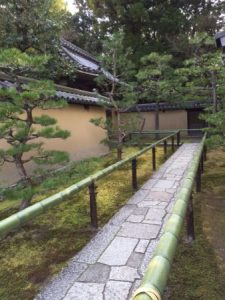 This is the gate of Ko-to-in sub-temple in Daitokuji. Its garden is very beautiful.
Many tourists come in especially in autumn to see red maple leaves, but I like the atmosphere of other quiet seasons, too.
Its fresh green moss are so beautiful in rainy season and early summer, when we don’t have much people.

There is another sub-temple Gyokurin-in next to Ko-to-in. It’s not open usually, but it holds tea ceremony every month in 7th. I have joined tea ceremony as a guest and a helper of the host.
I’ve heard Omote tea ceremony school will be the host this month. 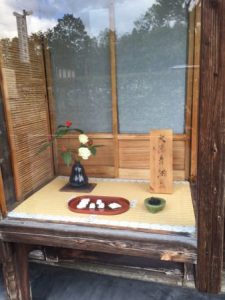 Daitokuji Natto (beans) are different from the sticky smelly beans called just “Natto”. It’s like salty miso taste, sold in front of Daitokuji temple.
It’s black and moist made by the fermentation of the malts.

We often see them in the Japanese sweets mixed with sugar, but natural Daitokuji beans tastes like miso,
so I’ve heard it’s good to eat with rice and tea (Ocha-zuke) or sake. We can use it for cooking for vegetables also. 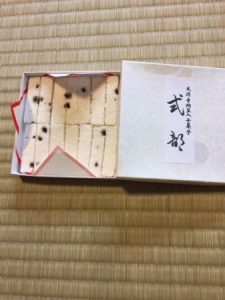 This is the sweets using Daitokuji beans, named “Shikibu”.

It’s made of Japanese sugar wasanbon and ordinary sugar. Daitokuji beans is like the spice in the sweet sugar. 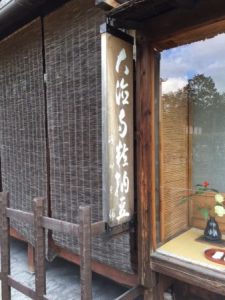 Isoda is the traditional Japanese house selling Daitokuji beans and sweets using them.

Shikibu is the small rectangle dried sweets.
It matches with powdered green tea for sure, and coffee also.
We can have their other sweets using Daitokuji beans called “Sansai” in the coffee café Ishida near Kinkakuji temple. It’s delicious.

You can have Shikibu in Tea Ceremony Koto today.

I’m looking forward to seeing you. 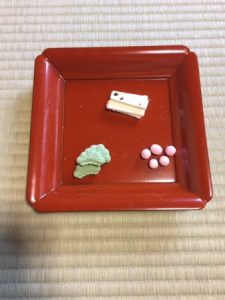