Where do Kyoto citizen recommend to view Sakura that aren’t crowded? 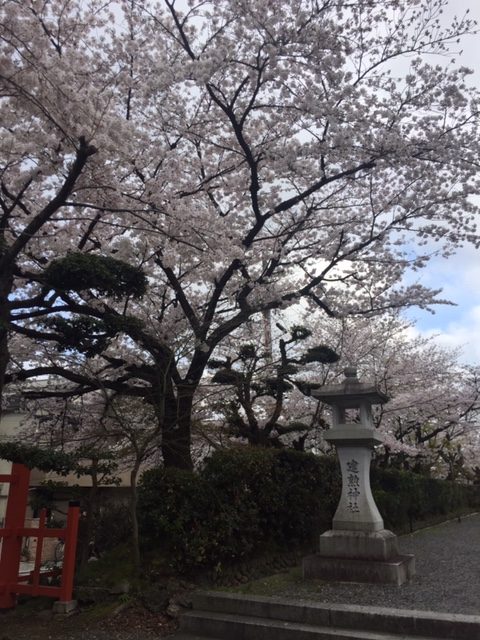 When it comes to sakura viewing, Maruyama Park (Higashiyama District), the areas surrounding Heian Shrine (Okazaki District),
and the Philosopher’s Walk (a path that follows a canal between Ginkaku-ji and Nanzen-ji) are probably the most well-known locations.
Daigo-ji (located in the southern area of Kyoto) is famous for its early-spring bloomers.
The sakura at Daigo-ji is actually the first sakura that we can enjoy in Kyoto.

On the other hand, Ninna-ji is known for its late bloomers.
The sakura at Ninna-ji bloom until mid-April.
These locations that I have listed are immensely popular and  often found in travel magazines and websites.
Unfortunately, these ‘best’ spots tend to be crowded and congested making it difficult to enjoy the flowers.

So, where are the best spots to view sakura that aren’t crowded? 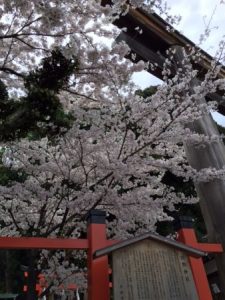 In the north ward (kita-ku) of Kyoto city, there exists a small shrine called “Kenkun” located besides Mt. Funaoka (Funaoka-yama).

In all honesty, Mt. Funaoka is no more of a mountain than it is a gentle hill.

Though the formal name of the shrine is “Takeisao”, the locals call it “Kenkun”. Even the city bus stop is named “Kenkun Shrine”!

The climb up the stone stairs requires some effort due to the shrine being located on an incline plane, but it is definitely worth the effort.

Last year at the end of March, I gave birth to my beautiful daughter.

Being a mother to a newborn baby is a tough but rewarding experience.

I did not have the time to go see the famous cherry blossom locations that year.

This is due to the fact that I reside in the northern part of the city while all the popular sakura viewing spots are located in the southern area.

Fortunately, I discovered the cherry blossoms of Kenkun Shrine. The place was beautiful!

I realized that there is no need to go to those crowded popular locations.

At Kenkun Shrine, it wasn’t crowded and I could enjoy the full-blooming cherries in peace.

I wonder why I hadn’t realized this earlier, especially since I had passed by the shrine numerous times before, when I was a university student.

Besides myself, I only saw one other family.

They had laid down a picnic sheet under the sakura trees and were enjoying themselves.

In regard to the picnic sheet, I think it would be wise to ask permission from the head priest just to be safe.

But the beauty of the place was no doubt, in a sense, ‘all theirs’.

To be honest, I was a bit envious as I watched them have a great time as a family.

Bottom line is that this place is definitely worth the visit. 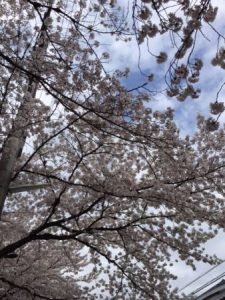 Previously, I mentioned a mountain next to Kenkun shrine called “Funaoka”.

Mt. Funaoka is famous for two reasons: it was the ancient reference point for the northern area of the city
and it was the base of the “Army of the West” during the Ōnin War (1467 to 1477).

Presently, it is home to a peaceful park for children to play.

The locals also use the area as a trail for walking. 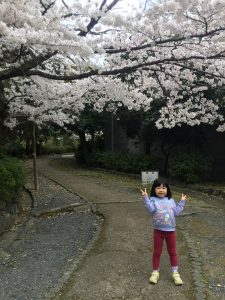 The Sakura in Funaoka Park is also very beautiful.

Not only is it beautiful but you also get a sense of history.

You should experience it for yourself when you have the chance!

The area around this region is lacking restaurants and maybe you’ll have difficulty finding one.

However, there is a cafe called “Café Sarasa Nishijin” that is close by a very popular among the young generation.

Their lunch offerings are superb and delicious. 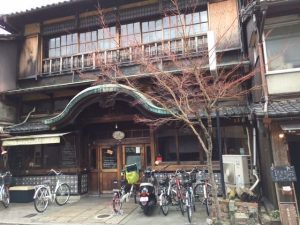 This place is interesting and unique because it was previously a public bath (onsen) that was reformed into a cafe.

If you look around in the cafe, you will notice the bath tiles from the building’s previous occupation intact.

They occasionally hold events such as Rakugo (Japanese verbal entertainment) and concerts.

During such occasions, a lot of people gather and the cafe is brimming with life.

Overall, it is a popular place with great food. 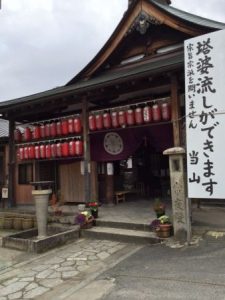 If you walk north on Kuramaguchi street from Café Sarasa, you will reach Senbon-dori street.

On this street, you will notice a couple small temples.

The manager of the temple is a Buddhist woman.

The temple also has a tea room, but it is not usually open. 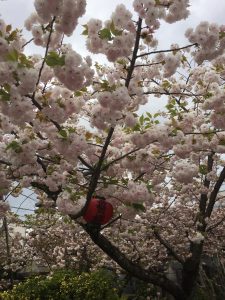 In regard to the Sakura, at first glance, they might be hard to spot.

They also bloom a little later than usual.

While most cherry blossoms (Somei Yoshino) bloom from the end of March to the beginning of April, the sakura in Enmado (Fugenzo) bloom later in the mid-April. Fugenzo is a old (even ancient) rare breed of Sakura.

In fact, it was the type that was loved by Ashikaga Yoshimitsu (1358-1408): the man who built Kinkakuji Temple.

One of the main differences between the Somei Yoshino and Fugenzo is that the Fugenzo has much more petals.

The temple holds an event every 3rd Sunday of April

where you can enjoy viewing the cherry blossoms at night as well as a outdoor tea ceremony. 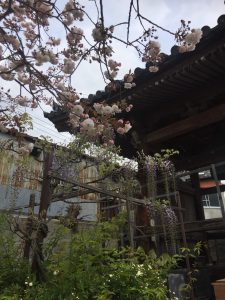 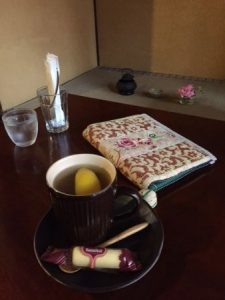 On the way to the next shrine along Itsutsuji street, we have a small cafe “Hidamari” next to the guest house ”Kioto”.

When I went there, I found some women came alone, some women in a big group for their graduation trip, and French couple.

Sitew and carry rice looked superb and delicious although I had lemon herb tea this day.

Since it’s old Japanese house, I felt like coming back to my home!

In addition, we had many delicious Kyoto shop around here I had mentioned before.

where I often buy sweets for the private tea ceremony in my tea house KOTO. 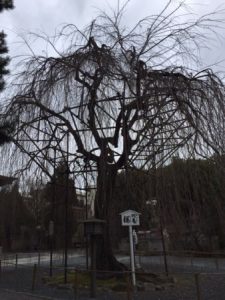 There is one last place I want to share with you guys.

There is a large weeping cherry tree that’s popular here.

It blooms the same time as the usual sakura do (Somei Yoshino).

If you go under the tree, it feels as if you are being surrounded by cherry blossoms.

The bus ride is only 8 minutes long to Senbon Imadegawa.

From the bus stop it is just a 4 minute walk.