Both peach blossoms and cherry blossoms are in full lately in the imperial palace in Kyoto. (March 27th 2016)

We must go now!

Walking from the peach filed for 2-3 minutes, we can see a big weeping cherry blossom, too. 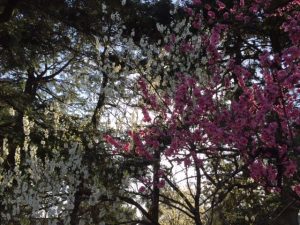 The best spot for peach blossoms in Kyoto is the imperial palace for sure though we have some other many must see spot for plum blossoms or cherry blossoms.

The color contrast of deep pink and white is very beautiful.

Since they are shorter than cherry blossoms, we can see the flowers beside our faces.

More Kyoto citizen than tourists seems visiting every year, but we found some foreign couple with a guide is visiting here today.

I think the season of plum blossoms in February or the beginning of March is still so cold that few people walking and we can hear the birds singing. But getting warmer in the end of March, the visitors look gradually increasing. 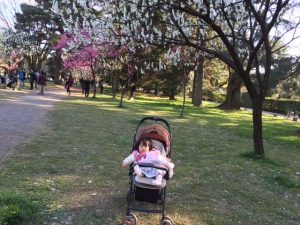 It’s also the great place to walk with small children.

It’s first peach blossom for her. 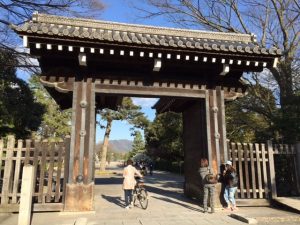 It’s also near from the traditional Japanese sweets shop, Toraya Ichijo shop in the front.

The gate Hamaguri is famous for the name of the war in August 20th 1864, Shogunate(Bakufu) army and Cho-shu (Yamaguchi prefecture now) army had made the war. The famous Cho-shu army, Matabe Kijima (1817-1864) was killed and Genzui Kusaka(1840-1864) stabbed each other with his brother-in-arms (like Seppuku together) in this war. We can find some bullets remain even now.

The nearest gate for plum & peach blossoms is this Hamaguri Gomon.

The weeping cherry in the imperial palace 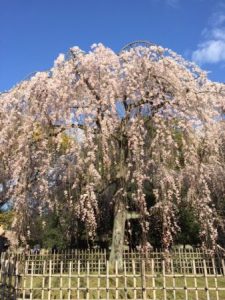 How gorgeous it is!

When we say Sakura in the imperial palace, it means this large weeping cherry tree near Imadegawa Gomon (gate), where Konoe loyal family’s house used to be.

Since weeping cherry blossoms start blooming before Someiyoshino, the most sakura in Japan, it is full blooming now!

Some families were having lunch around here seeing the beautiful cherry blossoms. It’s also great area for children to run and play.

We can see some groups of Doshisha university students next to the imperial palace get together around the weeping cherry in the April, when we welcome new students in Japan.

I long for the days I used to come here with my friends when I was a university student.

If you would like to enjoy both peach blossoms and cherry blossoms, you must go now.

Every year in the end of March is the best!