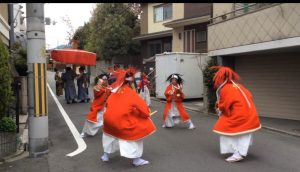 Imamiya shrine is a small local shrine which is famous with Japanese traditional rice cake with white miso called “Abueimochi”, the amulet for the women getting married with rich a rich man, and the curious festival “Yasurai” in April.

In 2016, they held Yasurai festival on the second Sunday in April as usual.

Not only inside of the shrine, but they walk around Nishijin area in Kyoto city wearing traditional clothes. Hearing the sounds of Japanese instruments and songs, people come out from the houses.

Because it’s thought that standing under the big red umbrella, we can stay healthy and ward off evils in this year. 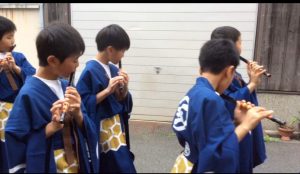 For me, it has been not strange because I’ve lived here since I was born, but this Yasurai festival is thought as one of the 3 best curious festivals in Kyoto.

The origin goes back to Heian period (794-1192), when the bad epidemic broke out after cherry blossoms blooming. Since the epidemic was thought to be caused by the spirits of flowers in those days, they held the special festival to warn off the evil spirits. red

Now, a baby carried by her grandfather also entered under the red umbrella.

The amulet for women to get married with a rich man 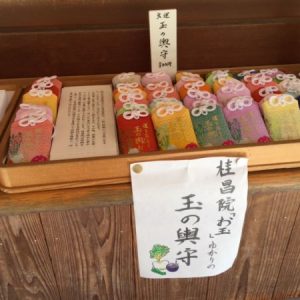 We have an old word in Japanese “Tamanokoshi”. It means a lady gets married with a rich man and become wealthy.

Why Imamiya shrine has such a special amulet? Actually, the origin is from a wife of Shogun (the strongest samurai), Tokugawa Iemitsu (1604-1651). Her formal name is Keisho-in though she had been called “otama” casually before getting married since she was born in the ordinary family of greengrocer around Imamiya shrine. After she became rich, she rebuilt this Imamiya shrine.

I have visited Imamiya shrine many times since I was born. A 1 month after I was born, 3, 7 years old and every new years.

I have never bought an amulet for Tamanokoshi, and I couldn’t get married.

Anyway, it’s getting an old word in Japan. I have to work hard by myself. 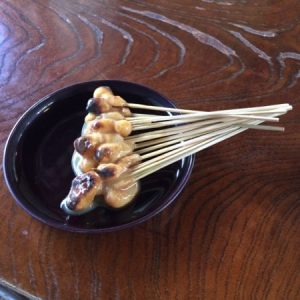 Ichiwa is the very long standing shop in Kyoto since Heian period, it meansover 1000 years old!

It’s really tasty rice cake with sweet white miso sauce. We Kyoto citizen have had them to wish the health since over 1000 years old.

For this kind of rice cakes, the brown leaf tea is better than powdered green tea. 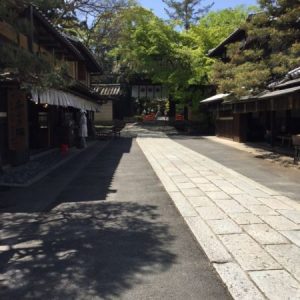 Imamiya is not so famous place for traveling, but just 2 or 3 bus stops from Kinkakuji temple. The path to Imamiya shrine has traditional atmosphere, which is worth visiting.