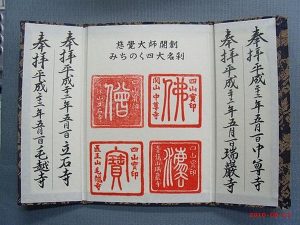 Goshuin is the certificate of the visiting for temples and shrines in Japan. It’s usually described with the calligraphy and red stamps. Originally, some Japanese who have the deep faith in Buddhism had brought this notebook to the temples. However, some young ladies who like visiting temples also starts collecting Goshuin as their commemorative stamps of the visiting.

The fee is usually just 300yen for one certificate. After praying at the main building of the temples or shrines, visiting the office of the temple and ask the priest to write Goshuin.

But please notice that some denomination (O-tani and Honganji) don’t accept the Goshuin because of their faith that the purpose of visiting temples shouldn’t be collecting something, but for the faith to receive some important teaching.

I agree we should keep the mind of praying more important than collecting Goshuin, but they must be great memory of traveling in Japan.

The package of handmade Goshuin-cho book by yourselves 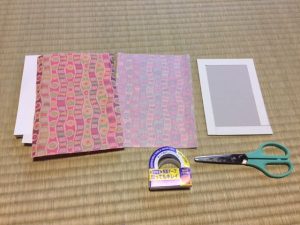 We only need this package, double sided tape, and a scissors. Mount a Japanese cloth (Donsu) or paper (Washi) on the pasteboard. You can choose from some pretty papers. 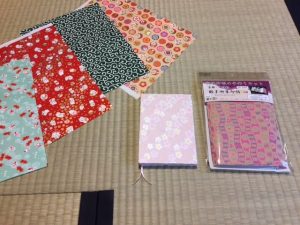 The middle one of cherry blossoms is the finished product. It’s pretty, isn’t it?

I can imagine the feelings of who want to collect Goshuin as their memory of visiting like stamp rally.

Would you like to join the class of Goshuin-cho book making? 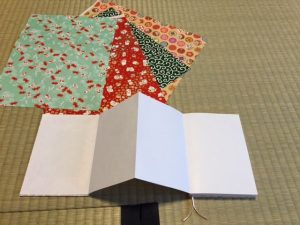 Hobbix, the maker of this interesting package plans to have the class of Goshuin-cho books for foreign tourists.

It’s popular among people who like visiting temples in Japan, but I guess it hasn’t been known among foreign tourists yet.

Meanwhile, it might be more famous and popular since Japanese calligraphy has been already popular among travelers from all over the world.

The owner of hobbix might have his class in Tea Ceremony Koto in the future. I’m excited to see the special & original class.